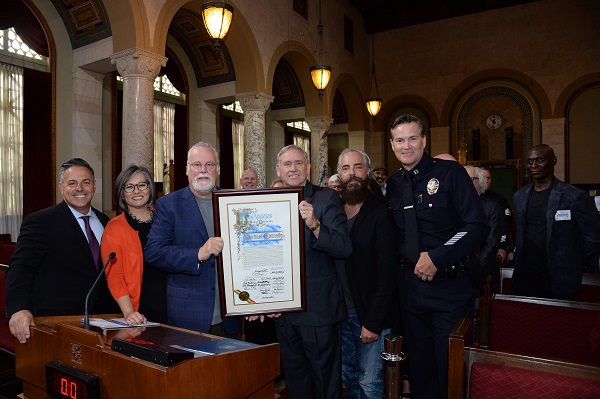 Many of you may know, Michael Connelly as the best-selling and critically acclaimed author of 33 novels and creator of the iconic character of Hieronymus “Harry” Bosch who has also been adapted for films and television on the hit Amazon show “Bosch”.

But more than being a successful author who has sold millions of copies of his books throughout the world, the reason I wanted to celebrate and honor Michael Connelly is his commitment and compassion to our communities and to the individuals who work every day to protect and to serve those communities.

Michael doesn’t just write about police officers, he knows them and makes efforts to learn about their lives so that the portrayals of characters in his books are not only accurate but a deeply humane portrait of life as a police officer and investigator: the good, the bad, and everything in between. You can read about how Michael uses the real-life experiences of LAPD detectives in this recent LA Times article.

And in his success, Michael has also used his platform to promote causes to help those in need in our communities.

If you haven’t already, you may start seeing the phrase “Everybody counts or nobody counts” on T-shirts. That phrase is the Harry Bosch character’s motto and it is also now the rallying cry for a campaign in support of My Friend’s Place which helps homeless youth build self-sufficient lives. And while Michael is normally pretty reticent about using his popular character for merchandising purposes, this was something for which he was willing to make an exception. You can support the campaign for My Friend's Place, here.

This is a cause each of us know is absolutely essential in this moment. With homelessness reaching a crisis point, it is one of the many reasons Michael is much more than a successful novelist, but a pro-active citizen worthy of recognition by this City Council.

Thank you Michael Connelly for your incredible story-telling and dedication to our City.